You knew from the first moment you pulled up into the large car park and entered the pub that you were in for a good time.

Tables were full and as you passed the carvery area the meat and vegetables looked fresh … and succulent.

We had booked in advance as we knew the Bunbury Arms had a good reputation and one which it is extremely proud of.

Our favoured time was 1pm but there was nothing available until 2pm so we took it.

And by the time we left our table, nestled into a warming corner of the building, people we still coming in to savour the Sunday carvery.

There was five of us and we all decided to go for the carvery although there was an a la carte menu to choose from.

It included starters from soup to nachos and prawn cocktail to crispy king prawns, for main course from steak, ale and mushroom pie to breaded whole tail scampi to cheese burger and salads and for dessert from creamy lemon tart to cherry bakewell cheesecake and profiteroles to sweet Belgian waffles. There is also a children’s menu which includes a mini carvery.

The selection of meats were turkey, pork, beef and gammon and we all decided on a mix.

Some had turkey and pork, others turkey and gammon and beef and pork although there was a vegetarian option of a carrot and coriander nut roast. 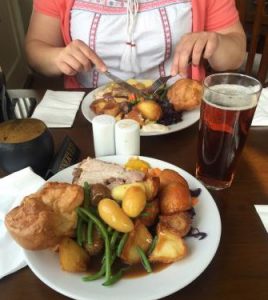 All the vegetables you could muster were also available and they included peas, carrot, red cabbage, parsnips leeks, roast and mashed potatoes and a giant Yorkshire pudding which one of us questioned: “Wow! Do you eat it or climb it?”

And as we were queuing up to fill our plates more of the veg was being replenished.

As we made our way back to our table we wondered what the quality of the food would be but we were all delighted and commented on the freshness of the vegetables and that they were not over-cooked.

And all for the price of £10.95 although that is reduced to £8.95 if you decide to opt for the carvery during the week.

The service was prompt and attentive although slightly stilted as the waitresses appeared to be really busy.

But it did not detract from a delightful lunch break for the five of us which we all thoroughly enjoyed. 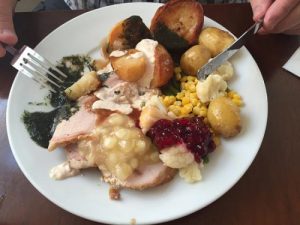 We discovered that the Bunbury family originated from Cheshire and maintained estates there until the mid 18th century when much was sold by Rev Sir William Bunbury to raise money to purchase more property in Great Barton and Mildenhall.

Sir Henry Edward Bunbury, latterly Lt General, was responsible for much of the building on the estate, including cottages in The Street and the almshouses. He also built the Bunbury Arms in 1844, its suggested so that he could keep his workers where he would be able to keep an eye on them rather than them going into Bury for a drink.

The Epsom Derby would have been called the Epsom Bunbury if Sir Charles Bunbury had not lost the toss of a coin to name the race to Earl Derby.

The pub sign depicts the coat of arms of the Bunbury Family. Their purpose was to distinguish one from another in battle. The Bunbury’s coat of arms is a black diagonal line on a white shield with three chess pieces: Rooks. To the left the shield is an open iron helmet used to depict knights and baronets. The Bunbury’s were baronets. The title sir being passed down to the eldest son, their wife would have the title lady. Above the open iron helmet, is the crest of the Bunbury family.

We thoroughly recommend you try The Bunbury Arms if you like traditional “Pub Grub” and lots of it. 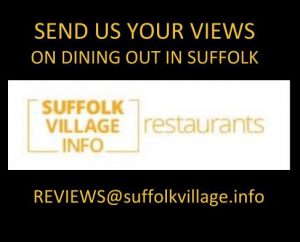 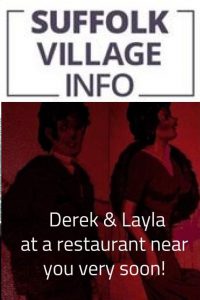 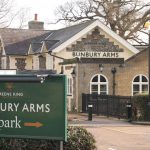 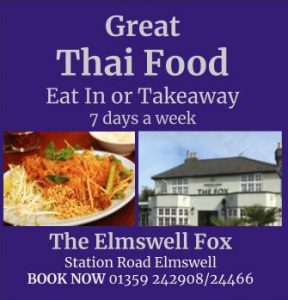